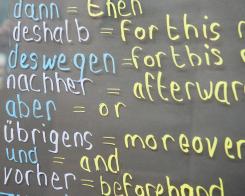 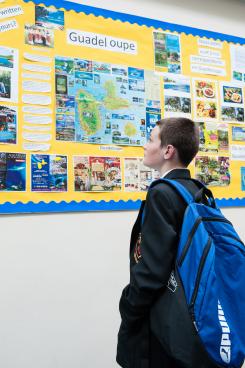 Students are assigned to either a French or a Spanish class. We follow the Speak First programme, which puts an initial focus on speaking, building up students’ confidence and fine tuning pronunciation[JB1] [WU2] . In both languages, students begin with a topic about aliens, in which they learn to describe themselves and others. In French, students learn about Francophone festivals and holidays. They then learn about the Congo rainforest. In Spanish, they learn to talk about where they live as well as discovering about different Latin American countries. They then learn about Spanish and Latin American festivals and holidays.

In Year 8, our more able language students (about 40%) pick up German alongside either French or Spanish. As in Year 7, we follow the Speak First programme. Topics covered in the first year of German include talking about ourselves and others, Berlin, Carnival, music, school and work.

In Year 9, all of our students further develop their language skills, becoming more confident in using a variety of tenses as well as other more complex grammar structures. Topics for French and Spanish in Year 9 include celebrities, a film project (“Les choristes” for French and “Los voces inocentes” for Spanish), social and environmental issues. Topics in Year 9 German include 20th century German history (WWII, the holocaust, the Berlin Wall), holidays and a film project (“Das Wunder von Bern”).

Assessment of all 4 skills of listening, speaking, reading and writing tasks is carried throughout KS3.

Homework is fortnightly (per language) in KS3 and usually takes the form of vocabulary learning. All of our students are set up on memrise.com, an online platform and mobile app, which enables students to take a more independent approach to their learning.